Just how big of an effect would a mandate repeal have? According to CBO, 13 million fewer people would be insured in 2027 compared with current law while Health Insurance premiums would spike by 10%. That’s because, without the policy “stick” of a mandate, healthier and wealthier Americans would likely drop out of Obamacare’s marketplaces, in turn making individual health insurance risk pools more costly by disproportionately leaving them with sicker Americans. 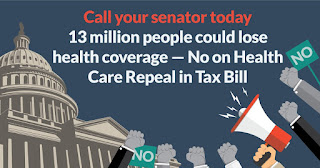 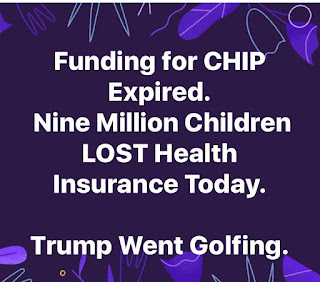 CHIP Insurance Expires
Congressional leaders have repeatedly promised to provide funds for the popular Children's Health insurance program, but disagree over how to cover the cost. So Congress may provide short-term relief for states with the most urgent needs while negotiations continue between the President and congressional Republicans.
It’s not clear exactly how many children could lose coverage when their money runs out, the most informed guess is between 9-12 Million children. States are required by law to continue to cover children whose insurance is managed through their Medicaid programs until the end of 2019. Such children make up more than half of CHIP.
Posted by Unknown at 7:14:00 PM