The OCCUPY Movement 99% is waiting!

No victory for Occupy yet! 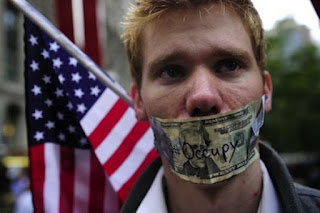 We can succeed only by concert. It is not,"Can you imagine better?" but "Can we all do better?" Object whatsoever is possible, still the question recurs, "Can we do better?". The dogmas of the quiet past are inadequate to the stormy present. The occasion is piled high with difficulty, and we must rise with the occasion. As our case is new, so we must think anew and act anew. We must dis-enthrall ourselves, and then we shall save our country. Every victory comes with sacrifice, What is your sacrifice

Occupy wall Street is about the future!


While the Mayor New York changed the Law to get himself elected for a third term the mayor filled with his own hypocrisy has become the Prime supporter of the 1% him being a member of the one percent himself. How much have things changed for Mayor 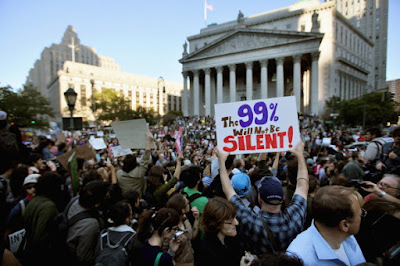 The Occupy Movement  is about Fairness, Not Grudge!

95 percent of all Americans work for someone in the last 30 years the salary's and benefits of the top 1% has seen their income rise by 275%- 305% .in easy to understand language any  who valued  million Dollars thirty years ago is now 300 Million Dollars notwithstanding all the negative effects on our Economy.


Most Walmart workers are only able to work in their store because they get benefit like medicaid and food stamps from the Government, essencially the Government is now paying health care and food walmart for Walmart workers. One member of the walmart family earm more than 62 million americans last year with their wealth stached in a Bank accounts in a foreign countries and taxpayers pay for their workers healthcare and food.

Factoring in what taxpayers contribute for public programs, the report estimated that one Wal-Mart supercenter employing 300 workers could cost taxpayers at least $904,000 annually.

At the end of 2012, there were 3,216 Wal-Mart employees who were enrolled in Wisconsin public health care programs, more than any other employer. Add in the dependents of Wal-Mart workers and the total jumps up to 9,207.

"Walmart a Job Creator or a corporate welfare recipient".