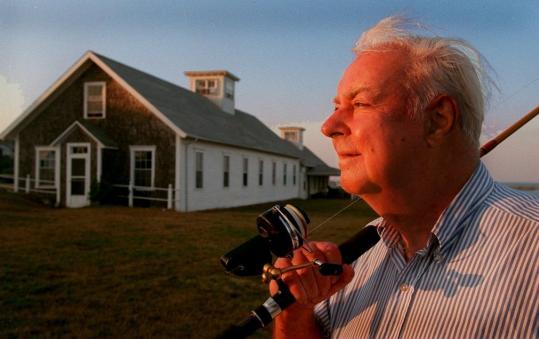 Robert Lowell "Robin" Moore, Jr. (October 31, 1925 - February 21, 2008) was an American writer who is most known for his books The Green Berets, The French Connection: A True Account of Cops, Narcotics, and International Conspiracy and, with Xaviera Hollander and Yvonne Dunleavy, The Happy Hooker: My Own Story.

Moore also co-authored the lyrics for the "Ballad of the Green Berets", which was one of the major hit songs of 1966. The song was also featured in the film based on Moore's book which starred John Wayne. A new edition of The Green Berets was published in April 2007 and his last book, Wars of the Green Berets, co-authored with Col. Mike 'Doc' Lennon, was released in June 2007.

At the time of his death, Moore was residing in Hopkinsville, Kentucky (home to Fort Campbell and the 5th Special Forces Group) where he was working on his memoirs as well as three other books.

Born in Boston, Moore was raised in Concord, Massachusetts, where he attended Middlesex School. He also attended Belmont Hill School.

During World War II he served as a nose gunner in the U.S. Army Air Corps, flying combat missions in the European Theater. For his outstanding service, he was awarded the Air Medal. Moore graduated from Harvard College in 1949, and one of his first jobs was working in television production and then at the Sheraton Hotel Company co-founded by his father. While working in the hotel business in the Caribbean, he recorded the early days of Castro in the non-fiction book The Devil To Pay.

Port Antonio is on the the island's north coast of Jamaica and is a charming blend of old and new. Port Antonio was Jamaica's first tourist resort, and is a favorite resort for writers and artists. like Errol Flynn, Johnny Cash, Robin Moore is said to have written the 'French Connection' while on one of his Jamaican Holidays sitting under a mango tree in his yard in Port Antonio.