Drumbeat to war!, we will be greeted as liberators. Dick Cheney

Q: Do you think the American people are prepared for a long, costly, and bloody battle with significant American casualties?. 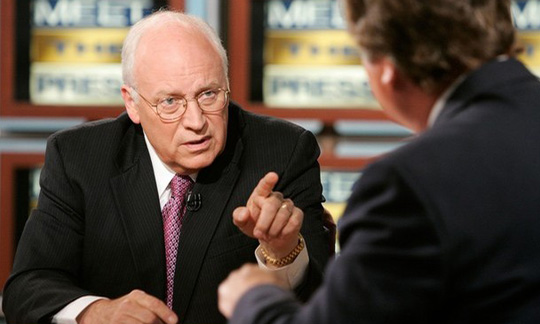 We will be greeted as liberators.

Q: Mr. Russert: If your analysis is not correct, and we're not treated as liberators, but as conquerors, and the Iraqis begin to resist, particularly in Baghdad, do you think the American people are prepared for a long, costly, and bloody battle with significant American casualties?

Vice President Cheney: I don't think it's likely to unfold that way, Tim (Tim Russert), because, I really do believe that we will be greeted as liberators. I've talked with a lot of Iraqis in the last several months myself, had them to the White House. The president (President George W Bush)and I have met with them, various groups and individuals, people who have devoted their lives from the outside to trying to change things inside Iraq. And like Kanan Makiya who's a professor at Brandeis, but an Iraqi, he's written great books about the subject, knows the country intimately, and is a part of the democratic opposition and resistance.

The read we get on the people of Iraq is there is no question but what they want to the get rid of Saddam Hussein and they will welcome as liberators the United States when we come to do that.

The reality of it all is Vice President Richard Cheney and President George W Bush could not have been more wrong. The answers Dick Cheney gave to Tim Russert were later proven to be figments of Dick Cheney's imagination on the Drumbeat to war in Iraq. The interview with Dick Cheney by Tim Russert was one of few serious penetrating inquisition by the press truly examining the consequences if the prediction my the Bush administration turn sour and they did.

A total of 4,486 U.S. soldiers were killed in Iraq between 2003 and 2012, The war has killed at least 134,000 Iraqi civilians and may have contributed to the deaths of as many as four times that number, according to the Costs of War Project by the Watson Institute for International Studies at Brown University.

The U.S. war in Iraq has cost $1.7 trillion with an additional $490 billion in benefits owed to war veterans, expenses that could grow to more than $6 trillion over the next four decades counting interest