Target Stores Off the Rails 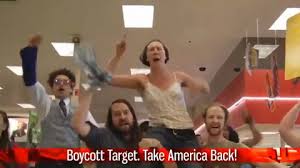 Target Low wages will destroy Store
Obviously not many people making comments have ever worked for Target, Target was good when it did right by its employees however in the last 2 years after employing a CEO with Wall Street back ground they changed their business plans reducing guest services in their Stores and start filling their shelves with inferior attractively merchandise.

Guests continue to shop at Target because the Stores continue to maintain a clean environment, but more often than not the Store shelves are empty and advertised merchandise is not available the very day their sales start.Target does not believe anymore in catering to their guests but to Wall Street results. They create the environment where the guests will come to the store to make purchase, most times your merchandise is unavailable and they are hoping you will purchase some inferior cheap attractively packaged merchandise that the guests does not often need and will never use.

Target pays its Team members the lowest wage in the Retail Industry, even lower than their competitor Walmart, they offer the best benefit plan in the industry but only 20% of their employees enjoy those benefits. The people who do the really hard work in Target Stores does not enjoy any of the company's benefits because the Company employ them as perennial part time employees keeping them below the minimum hours that would enable them to to get these benefits.

Target Team Members for the most part does not even get paid for holidays, a very small percentage of them do because holiday pay this is calculated on an average hour worked basis.
Team members are willed to come into work on holidays but are not compensated for it but face punitive actions by store management sometimes without knowing if they do not show up for work on Holidays. These could from write ups to reduce hours or any other action that are discriminatory action that are packaged to appear otherwise.

The current action by Target giving funds $150.000.00 to a major Political Party to influence Legislative action may be not targeting Gays and Lesbians but is a reckless action by Target Corporation at a time when the average wage increase to its core sales floor employees is between 6-8 CENTS PER HOUR.

Target like most other major retailers including Walmart has vehemently fought against Unions convincing its Team Members they can protect them better than any Union can. This is a disservice to to its Team Members by giving them the opportunity to weigh the difference, if Unions are so bad let the Team Members find out.

This controversy and bad press gives Target an opportunity to take a broad view of what is and what was or whether the want to improve their tarnished image. To do this Target must rebuild it relations with his Team members giving them a reasonable wage for their backbreaking work they do, fill its Store shelves with advertised merchandise that its guests are kept happy and not stupid rain checks that never get satisfied and phony substitutes that no one wants.

Target is a good company gone off the rails for some time now get adult supervision in the building, time to wake up TARGET.
Posted by Unknown at 2:57:00 PM